Defend the world on a battleground
where time has collapsed!

AD2221
Despite two galactic wars fought to achieve dominance,
humanity remains divided into seven factions.
In order to continue warfare,
mankind has begun constructing a new artificial battlefield, the battle territory.
There, the battle to determine who will rule the stars,
known as local warfare, is set to commence.

The seven factions in the Heliosphere send pilots (Stringers)
and combat bio-machines called VA (Vital Armor)
to the battle territory via dimensional transmission.
However, during a final experiment,
mysterious photon beings called "Non-carbides" appear on Jupiter's moon Callisto,
halting the flow of time in the battle territory.

As the area affected by the time stoppage expands,
the Heliosphere Management Committee (HMC) orders
the seven factions to dispatch their elite units in order to eliminate the Non-carbides.

A battle to restore time is about to begin──

Undulation Tower Offense
Up to four player co-op.
This is a tower offense game on an undulating battlefield.
Players strengthen their VA by defeating enemies that will attack from four different zones. Clear the stage by defeating the stage boss before your base is destroyed.
The zones change with every match, including turret placement, the path of projectiles, and the enemy's advance route.
In addition to employing your VA's techniques, coordination, strategy, and spatial awareness are all key to victory.
Phantom Mode
As the game progresses, you will eventually be able to invade other players' battles as a member of the enemy team.
Despite the overwhelming disadvantage of going up against four players alone, you can still win the battle by using enemies to your advantage, invading at the right time, and matching your strategy with the battle terrain.
There are also IA enhancement rewards that can only be obtained in Phantom Mode.
Players will always feel the tension of not knowing when they will be invaded next.
Defeating invading VA will earn players big rewards.
Dynamic mechanical art shaders
Dynamic mechanical art shaders have been used to bring the essence of CG box art from robot plastic models to the game.
This achieves a sense of immersion and lavishness not found in other robot games.
Screenshot game highlights to create your own gallery of glorious images that look like box art.

Combat bio-machines that originated from power suits.
Abbreviated as "VA", these giant weapons are piloted by humans and are the core weapon system in local warfare.
Their main characteristic is the "Hypercommutative Block System," universal joints that connect machine parts using gravitational cords.
This system has eliminated various bottlenecks in military operations by promoting diversification in VA design, increased maintenance speed, compressed transport space, and a broader range of mobility.

Each VA is installed with a unique, invariant autonomous entity.
This entity controls the VA using computing power that cannot be achieved with the human brain and supports Stringer piloting. 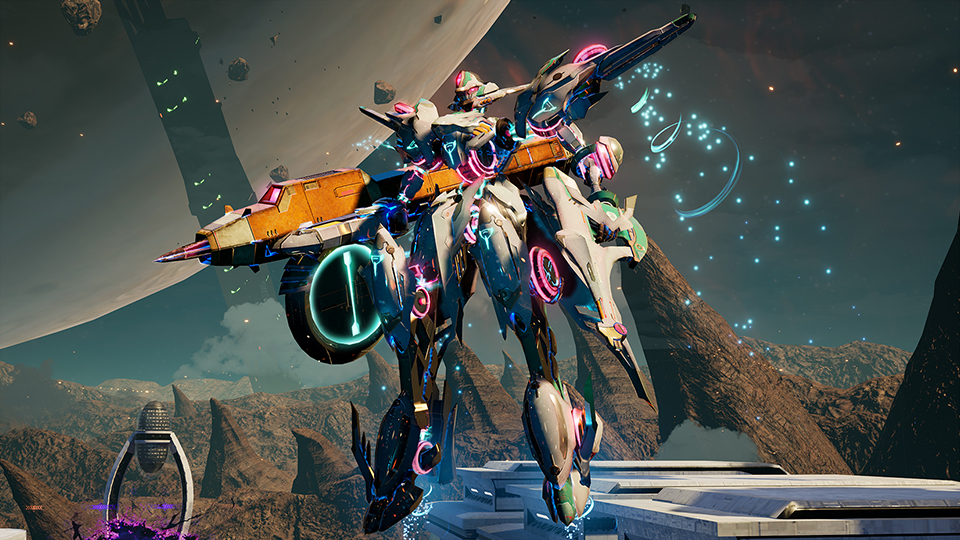